Are you willing to stand by and do nothing? 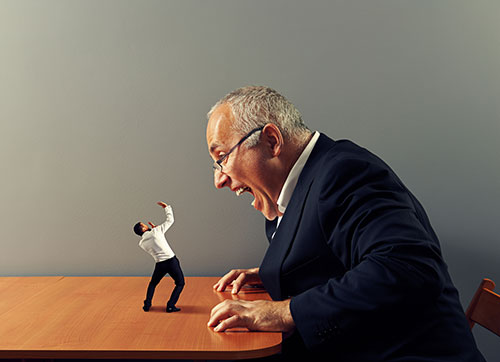 Our in- house psychologist and trainer Alexina Baldini has shared some interesting insights into the effect of bullying and the bystander effect that come into play in the workplace.

Bullying and the Bystander Effect

One of the most common factors in workplace bullying situations is that managers and co-workers typically ‘turn a blind eye’ to the bullying. The reasons for this vary enormously according to where the work occurs, the type of social environment that exists in the workplace, and the awareness of bullying and its implications, just to name a few!

Social psychologists Bibb Latane and John Darley first identified the ‘bystander effect’ (originally called “bystander apathy”) in 1968. Four of their experiments looked at the effects of people’s behaviour when hearing distressing sounds in various conditions, such as being alone, with a friend, with someone playing a passive role in collaboration with the experimenter, or with a stranger. They found that people were much more likely to act if alone or with a friend than when with someone acting passively or a stranger. Other experiments showed that the more observers, the less helping occurs because of what is known as ‘the diffusion of responsibility’ with workers using self talk such as ‘someone else will help’ or ‘it’s not my business’. Additionally, bystanders can be slow to respond because they are looking to see what the others in the group will do.

Surveys indicate that very few people (sometimes as few as 12%) report that they have witnessed bullying. For some, it may be that they don’t interpret what they see as bullying (‘oh, that’s just the way we talk to each other here’ or ‘she’s just teasing’). Simple bullying awareness education can help a workplace combat this and lower risk of harm to staff and coming to the attention of the Fair Work Commission through its recent Anti-Bullying legislation. Education about ways to intervene is also likely to lower the risk of harm to those witnessing the bullying. Harm can include increased use of tobacco, alcohol and other drugs, increased mental health problems including depression and anxiety, and absenteeism and presenteeism.

Helpful bystanders have the power to play a key role in preventing, minimising or stopping bullying. They can directly intervene by discouraging the bully, defending the victim or redirecting the situation away from bullying. Alternately, they can get help by rallying support from peers to stand up against bullying or by reporting the bullying to appropriate personnel. Clear policy and procedures around antibullying are essential as part of any organisational approach to health and safety in the workplace.

Psychologically, people often fear that if they step in this will make them a new target for the bully, or make things worse in terms of splitting teams or taking sides. Fear of being a ‘dobber’ can also make staff reluctant to speak up about what they see, and often bullying is behind the back of management, so they may not be aware unless someone does report it. Fear of reporting can also be related to not being clear about what will happen with the information and whether the reporter is protected. We know that most bullying occurs with peers around (over 80% of the time) as bullies gain power from having an audience and frequently try to involve others with their bullying behaviour. According to the Canadian Red Cross, 57% of the time bullying stops within 10 seconds when a bystander steps in.

Guilt is another common emotion associated with being a bystander of bullying, as often workers feel bad about what happened to the victim and that they didn’t intervene. Again, education about the steps to intervene can support those staff and minimise productivity impacts as they agonise about whether they should have done something. This can also be helpful for those who are ambivalent and sometimes step in and sometimes avoid action, or feel they should act but may want to avoid conflict.

Intervention strategies for bystanders can be readily taught within workplaces and involve:
Report the behaviour – don’t assume it is related to a private matter between the bully and the victim, it will always have effects on the whole environment

Resisting feeling like it is none of your business – put yourself in the victim’s shoes and workplace violence is never healthy for the bottom line!

It is vital to seek support for yourself!

We hope you find this information useful to help you deal with any bullying issues that you may come across and help you to handle them more effectively.

If you would like to know more about our Anti Bullying and Harassment courses, you can find out more at our website